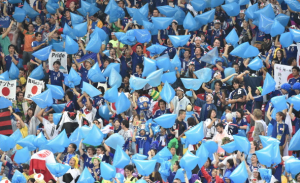 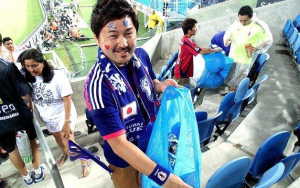 Since I watched the first football game of Japan against Côte d’Ivoire during the Fifa World Cup in Brazil, I wondered why the Japanese fans were cheering their team with blue plastic bags. I found that really odd! But now that I know the answer, it’s truly admirable! They are not only using these plastic bags as a cheering tool, but mostly after the game they pick up the trashes after themselves so that to leave a clean place! I just couldn’t believe it when I heard that, and the fact that it has inspired other countries fans to do the same, it’s amazing!! No wonder why they have been voted the best fans at the World cup! Love Japan! <3